A Passion for Teaching and Giving (unrestricted) 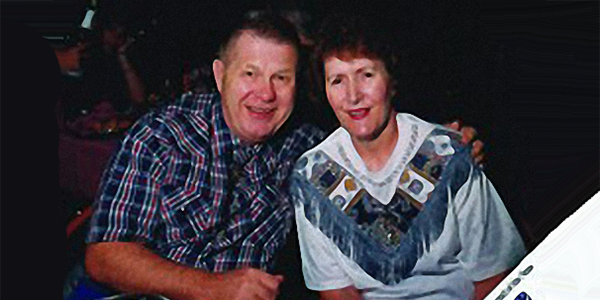 Maya Angelou once said, "When you learn, teach. When you get, give." Ball State alums John Johnson and his late wife, Beverly Johnson, made a life out of teaching and giving.

In 1956, John Johnson saw Beverly Hoover, who was working on her master's in education, talking to a couple friends of his outside of Ball State's administration building.

"She was down there talking to a fraternity brother of mine, who was engaged, and a friend of mine who was married, so I knew they weren't interested," John says. "It took me about a minute after she had left to go down and find out her name. I called her for a Coke date, and we went to the Student Union building that evening. I never dated anyone else after that."

Ball State Beginnings
When he originally enrolled at Ball State, John's intentions were to become a sportscaster, so he spent his time working for WLBC and WLBC-TV as a play-by-play announcer. However, after taking a phonetics course to help him properly pronounce various athletes' names, John was encouraged to consider a future in education and speech therapy.

John and Beverly Johnson have 76 years of teaching experience between the two of them. After their wedding in 1958, they moved to Mishawaka, Indiana, where Beverly helped pilot the elementary guidance program for the state of Indiana and went from teacher to elementary counselor to elementary principal. John traveled to South Bend to work, where he taught middle school math, coached, and continued sports announcing part-time for the University of Notre Dame.

In 1978, the couple moved to Gainesville, Florida. John began experimenting with different ways to help children who suffered from stuttering. He found inspiration from his hobby as a ventriloquist, and began teaching that skill to first-, second-, and third-graders, while also teaching in the elementary gifted and talented program and high school drama in Florida.

Beverly's teaching style gained the attention of other teachers and officials across the state of Florida. John recalls that teachers from surrounding counties would come to watch her teach, and Florida's first lady even visited her classroom. She later was given the Master Teacher Award from the state of Florida, an honor that only 3 percent of the population receives.

"I know I'm prejudiced, of course," John says. "But she was, by far, the best teacher I ever saw."

Helping Future Generations
Having no children of their own, the Johnsons wanted to invest their money in a way that would help future generations in the field of education. Through a charitable gift annuity, they decided to give a generous and unrestricted endowment to Ball State's Teachers College to impact the lives and experiences of its future teachers.

"We love Ball State! We thought Ball State did a lot for us while we were there preparing us for our teaching career," John says. "We thought it would probably do the most good there. With the gift annuity, it was a pretty good investment for us, too."

Discover a Gift That Gives Back
See how a personalized illustration of a gift annuity can provide you with fixed payments and many tax benefits. For more information, simply contact D. Mark Helmus at 765-285-8312 or dmhelmus@bsu.edu.