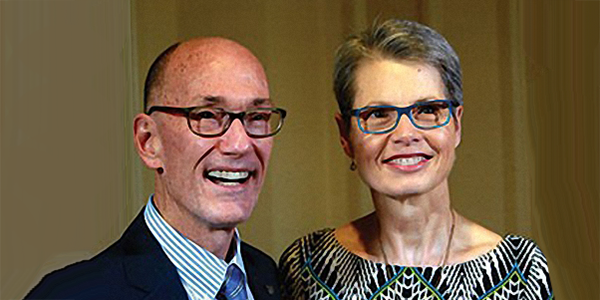 Dick and Kim Poppa have made supporting Ball State University a part of their lives. They are ensuring their support lives on for years to come with a gift for the future.

Dick, '74, and Kim (Parks), '76, Poppa love everything about Ball State University. Both proudly wear their spirit gear and can tell you just about anything you may want to know about the University. It doesn't take more than a few minutes with this couple to see how passionate they are about giving back through their ongoing engagement and philanthropy-ultimately leaving their legacy through a bequest to Ball State.

They met in Ball State's Student Government Association office. As far as Dick is concerned, it was love at first sight. After sharing their first date on Halloween, they were married about seven months later. Following graduation, they traveled for his job, living on the West Coast, in Washington, D.C., and upstate New York. Their most recent relocation, to Indianapolis, is what they jokingly call a "strategic move to be closer to Ball State."

"Ball State has always been close to our hearts, so close that we might actually bleed Cardinal red," Dick says. "Being in such close proximity now, we have been on campus once a week during the academic year. Between the football games and the shows on campus at Emens Auditorium, there's so much to do."

"And the Planetarium!" Kim adds. "Ball State offers so many wonderful things. It was a great school when we attended, but we're so proud of everything Ball State has become."

Kim is also a proud Ball State legacy. Her parents and many relatives went to Ball State. She says she never considered going anywhere else because this was home.

Over the years, the Poppas have given back in big ways to their alma mater. When they first got married, they supported the University through smaller gifts and through the Phonathon program. That became a cornerstone for their support of the University, leading to their continued involvement through the Indianapolis Alumni group, Dick's involvement with the Alumni Council and Miller College of Business, and their love of Ball State Athletics.

"It's just so fun," Kim says. "We have friends who aren't involved with their universities at all. That's so foreign to us. We've always wanted to be active and engaged with Ball State."

Having given for 27 consecutive years, the Poppas are Leaders and Loyals as well as members of Ball State's Fellows and Beneficence societies. Through their involvement and support of several fundraising campaigns, they've become more intentional with their giving, through sponsoring a Freshmen Merit Scholarship with the Miller College of Business and by including Ball State in their will with an unrestricted gift. Undesignated gifts provide Ball State with the flexibility to utilize those funds for the University's highest priorities at that point in time.

"We hope that we will be able to make an additional gift through a charitable gift annuity Dick says. "We just think it's the right thing to do. In this world, you need to give back in your time or your treasures. There are all kinds of ways you can give back, but you should give back. For us, Ball State was one of those things."

Their advice to alumni and friends who were considering supporting Ball State is simple: Find out what's important to you.

"My advice would be, first off, to hopefully make the choice to give back to your alma mater," Dick says. "Once you've made that choice, then to really identify what's important to you. To me, this all comes down to what is the individual trying to do to help the University. Once you have a sense of that, the staff at the Ball State Foundation will help you make that a reality."

Show Your Passion at BSU
If you would like to extend your support of Ball State after your lifetime, there are numerous gift options to choose from. To learn more, contact D. Mark Helmus at 765-285-8312 or dmhelmus@bsu.edu.