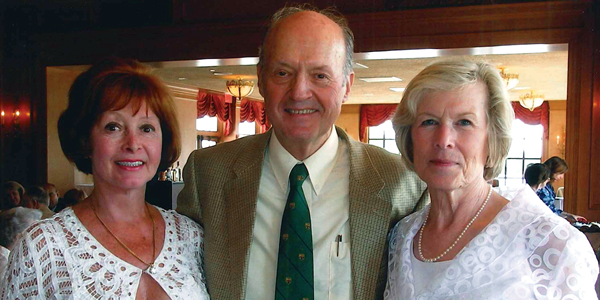 Growing up across the street from Bracken House, the traditional residence of Ball State's president, James J. Faris (Jim) remembers riding his bike around campus and attending many University athletic events.

Jim ended up attending college and law school elsewhere. But his sister, Jane E. Faris Pollak, '68 MA '71, became a proud Ball State Cardinal, earning bachelor's and master's degrees in music, which springboarded her to a long, rewarding career in teaching. A Pi Beta Phi and former Miss Ball State, Jane was actively involved in campus activities and even met her husband, Richard, at Ball State.

Jane's Ball State experience was so great that after her passing in 2017, Jim, along with his wife, Joan, decided to establish the Faris Family Scholarship at Ball State in Jane's honor through a bequest.

"Muncie and Ball State played prominent roles in our entire family's lives. It was only natural that we should do something to honor both my late sister and our family at the same time," said Jim.

After teaching in the Muncie Community School System for three years, Jane put teaching on hold to help raise her children, Sara and R.J. She later returned to teaching at Brebeuf Jesuit Preparatory School in Indianapolis for the next 24 years.

The passionate and popular music teacher, who also threw in a good measure of life lessons, made a big impact on many of her students. Along with a large number of family and friends, several of these former students attended her funeral, some bringing keepsake notes from Jane. One of these hand-written notes read: "No matter how educated, talented, rich, or cool you think you are, how you treat people ultimately tells all. Integrity is everything."

The Faris Family Scholarship will provide funds for incoming Ball State freshmen majoring in music. "This will allow Jane to continue to impact students for years to come," said Jim, who now lives in South Carolina, but has returned to campus on several occasions. "We never cease to be impressed with the growth of the University and its critical importance to Muncie. This scholarship is but one way we can honor Jane and contribute to the sustaining of the University and the community."